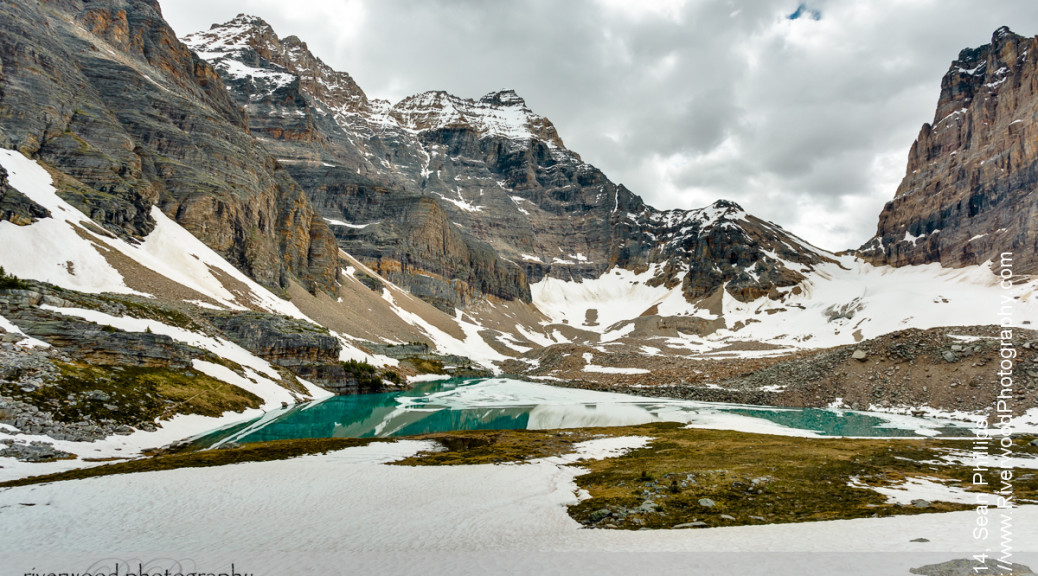 This is the 3rd of 3 articles about our recent trip to Lake O’Hara in Yoho National Park. 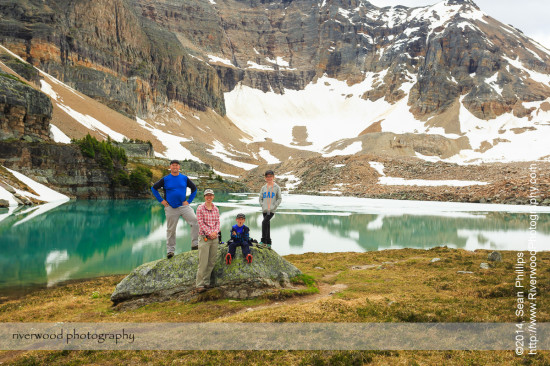 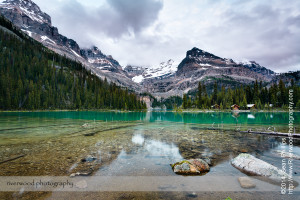 One of my goals (or optimistic dreams anyway) for this trip was to create some spectacular landscape images of Lake O’Hara at sunrise or sunset with alpenglow lighting up the peaks around the lake. Unfortunately the weather conditions were not ideal for making that kind of image and the sunset was blocked by low clouds on the horizon both evenings that we were there. It was lightly raining in the early morning hours of our 2nd day so I didn’t even get up at sunrise (which happens awfully early in late June in Western Canada!). 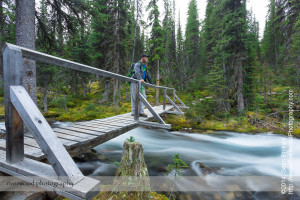 All my hopes were pinned on the 3rd morning! Unfortunately when I woke up I realized that it was still very cloudy and that the high overcast conditions would probably block me again. But I was awake and all my gear was ready so I got up anyway and made the 1/2 kilometer trek up to the lake from the campground. It was very quiet at that time of day and even though there were dozens of other campers in the campground and plenty of people staying at Lake O’Hara lodge I didn’t see another person for over an hour after I got up!

As expected the sunrise that I was hoping for didn’t materialize. But it was a beautiful morning and the lake was perfectly calm, so it wasn’t a total loss. I was actually able to make some images that I really like and I got to enjoy some peace and quiet in the mountains all by myself. And then I want back to camp to make coffee!

This was our 3rd and last day of the trip and we had to be out of our campsite by 10 AM. That didn’t really allow us to do a hike before packing up camp, so we had to clean everything up after breakfast and before taking off for the day. Fortunately the campground has a large bear-safe storage room where we could store all of our equipment while we were away from camp. We packed up as much as we could while still keeping one of the smaller packs aside for use as a daypack. We didn’t have a whole lot of food left anyway so we didn’t even take a lunch on this trip, we just took plenty of water and snacks instead.

Everyone was sore and tired from the previous 2 days of hiking but we agreed to attempt the last of the 3 most popular hikes in the area which was up to the Opabin Plateau and Opabin Lake. Melanie in particular was suffering and it took her awhile to push through the pain. It didn’t help that the start of this particular hike involved a very steep initial climb up to the plateau, before easing into a much more gradual ascent up to Lake Opabin.

We followed the eastern route of the circuit on the way up and the eastern circuit on the way day. The East Opabin trail climbs through a series of switchbacks along a lush trail beside a forested creek (which was a raging river at that time of year) before opening up on a grassy alpine meadow. It was such a relief to hit the meadow after a long grind that almost immediately everyone felt better and we really started to enjoy the hike. We had incredible views in every direction all along the plateau. It was one of the nicest areas that I have ever walked through and we didn’t see any other travellers until after we had reached Opabin Lake. Once again we felt like we had the whole area all to ourselves! 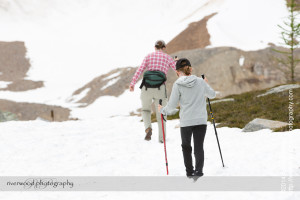 The lake itself was entirely free of ice even though the surrounding hillside and peaks above still had plenty of snow and ice hanging on. The contrast of the icy blue water against the steep cliffs rising above it made for some incredible views. We had to hike through quite a bit of snow near the top of the plateau in order to access the lake, but it was definitely worth it. 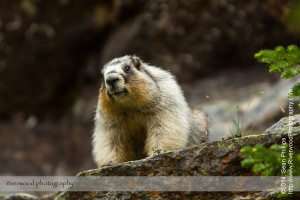 We finally started to come across some other hikers on our way back down the mountain. We must have had a much earlier start than most in order to make it half way back before really starting to see anybody! We hadn’t seen much in the way of wildlife (if you can even call critters like ground squirrels and marmots wildlife) but we did get a tip from one of the other groups coming up that they had recently seen a pair of adult marmots with a baby. They even gave some very detailed instructions on where it was and how to find! Unfortunately when we got there the baby was nowhere to be seen. The adults put on a bit of a show for us and I got some great closeup images. It would have been nice to see the baby too though! 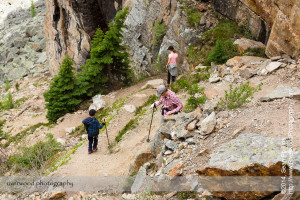 Our return trip back to the campground was via the East Opabin trail which travels along the east side of the Opabin plateau and down a very steep rock face. Although the trail was probably no steeper than the West Opabin trail that we followed on the way up, it was much more open space and Louise was pretty nervous about it. Particularly when Andrew started skipping and running down the trail! 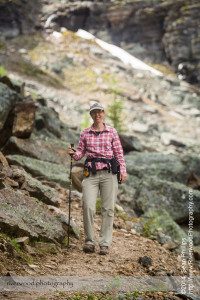 He thought it was pretty funny too. Fortunately we all made it down safe and it was a pretty spectacular way to end the trip! The views of Mary Lake and Lake O’Hara from the Opabin Plateau were unbelievable and that alone made the whole trip worthwhile.

We made it back to the campground in time to heat up some noodles for lunch and finish packing before we had to get back on the bus. All in all it was one of the nicest hiking/camping trips that we’ve ever done and we definitely plan to camp there again. We have already booked a day trip in October to see the fall colors. I can’t wait to go back!

See below for a few more pictures from the day, and check back soon for more from the rest of the trip. 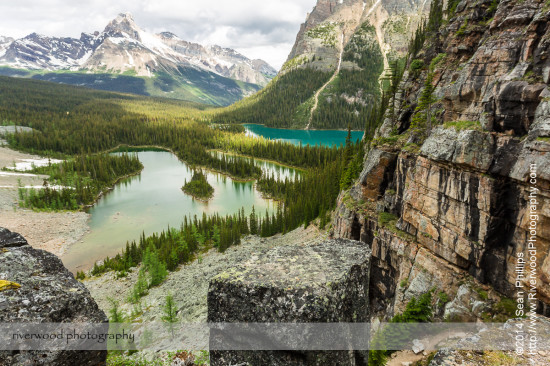