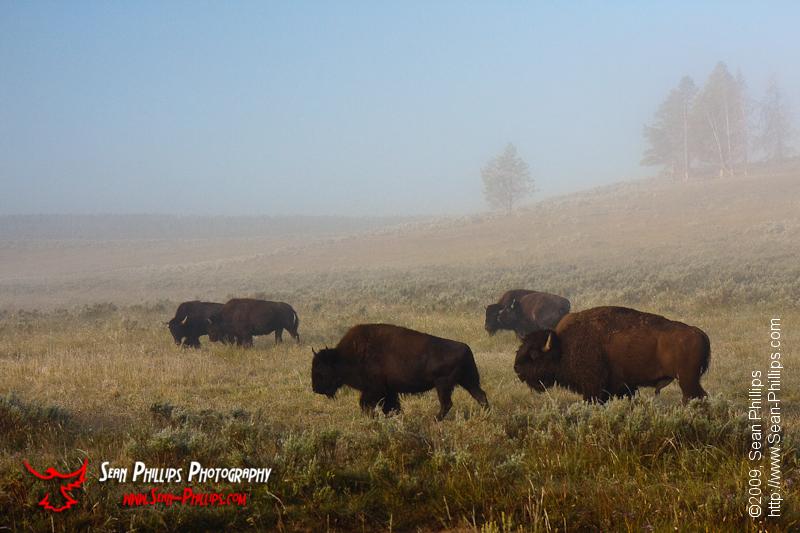 This is another really long post, so feel free to jump straight to the bottom to see the photos. But don’t forget to come back later to read the story!

For our second day in Yellowstone we decided to get up early and hit the highway right away instead of cooking breakfast at the campsite. There is a gas station adjacent to the Canyon campground so we went there for fuel: gas, coffee, tea, milk, and cinnamon buns. We wanted to be on the road in the early hours of the morning in order to have the best chance at seeing big game (and of course for beautiful photographic light). It certainly worked because we saw hundreds of Bison in the Hayden Valley area.

It was a beautiful morning with a thick layer of ground fog and a perfectly blue sky. The sun shining through the fog lit everything up in a surreal glow that was only enhanced by the brilliant blue of the sky. It was a dreamland for a photographer! The highlight of the day was seeing a huge herd of Bison crossing the river through the fog. It was a surreal scene that I will remember vividly for a long time!

The Bison ran and played through the river and gradually made their way across the road in front of us. Dozens of cars were forced to wait their turn to move past, and only a few cars at a time got through before more animals decided to cross. This continued for several miles along the highway. There are pullouts on the side of the road spaced regularly through the valley and we took advantage of several of them in order to watch the herd drift by. I may have used the opportunity to take a few photos as well…

I actually got out of the van a few times to get a better angle. I always tried to keep the van between me and the animals and I felt very safe the whole time. Many other people were doing the same thing. The only time it got “interesting” was when I failed to notice that one of the larger bulls had wandered around behind the van and was coming up behind me. Louise squeaked at me and I dove back into my seat. The bull barely noticed me but it still got my heart pounding for a few seconds.

Around about the same time I had been talking to another driver had who had crossed the road and left his vehicle parked on the opposite side. He decided he should probably wander back to his vehicle. Another driver, who was slowly driving past us, proceeded to stop his car, roll down the window, and scream at the guy for over a minute about how stupid he was for walking across the road. I agreed that he shouldn’t have walked away from his vehicle with so many Bison around, but I thought it was a bit much for the other guy to yell at him like that. Oh well, it takes all kinds…

We continued on our way, leaving the Hayden Valley area behind. Our main goal for the day was to see the geysers in the Upper Geyser Basin (also known as the Old Faithful Area). Old Faithful is not the tallest or most impressive geyser in the park, but it is the most predictable, and it is certainly the most famous.

There are dozens of other geysers in the area and many of them are also predictable, so the first thing we did when we arrived at the Old Faithful visitor center was to check in to see what the schedule looked like for the day. To say “schedule” is a bit of a stretch because many of the predictions only narrow the timing of the eruptions down to the nearest day. Sometimes it pinpoints it down to within hours, but very few can be timed to within a few minutes. On the day we were there, only 4 of the predictable geysers were on the books for the time we planned to stay, and 3 of them were to blow within 30 minutes of each other.

Old Faithful can generally be predicted to within 10 minutes, and it blows many times a day, so we chose to ignore it the first time it was scheduled and headed down the trail to see Riverside Geyser. Basically we decided that we had to choose 1 of the 3, and Riverside is one of the most picturesque geysers in the park. We ended up waiting for over half an hour but we finally got to see it blow. After it was finished we continued around the park to see some of the smaller and less predictable geysers, and several of the beautiful hot springs and pools that litter the area.

My favorite part of the Old Faithful area were the twin hot springs, Beauty Pool and Chromatic Pool. These pools are extremely colorful and they are situated in a very picturesque location with nothing spoiling the background, so I was able to make some really nice landscape images. Unlike almost any other photography, the best time if day to capture the beauty of these pools is when the sun is high overhead and shining directly into the pools. We were there right at noon and the light on the pools was fantastic!

It was a really nice walk with lots to see, but it was also a very hot day and we were very hot and tired by the time we made it back to the visitor center. We had a nice lunch and then made our way outside to watch Old Faithful blow before we got back onto the highway. It was pretty cool to finally see Old Faithful erupt, but in reality it was a little bit underwhelming compared to years of built-up expectations.